It’s one of the newer and lesser-known diseases in Canada. We ask the experts about what can be done to guard cereal crops against this destructive pathogen.

As a seed grower, what experience have you had with bacterial leaf streak?

Last year’s growing season is a good place to start. We saw many potential perils which could have contributed to the issue including a long winter, delayed thaw, wet spring soils and delayed seeding. A lot of crop residue was left to rot as the fall of 2019 was wet and harvest drew out, and little field work was done. Things dried out well for some and the crop went in relatively flawless, but then we waited and waited for moisture. Things were looking dry by late June and many were worried about drought setting in. I personally was on the edge of a significant rainfall event which occurred right at flag leaf timing in the crop, and the moisture levels were increased six to 10 times the norm within a 72-hour period, and humidity shot up with average daily temperatures over and above 26 C for the following weeks.

This set the stage for bacterial leaf streak in one of our fields. When we saw it, we mistakenly identified it as a fungal infection for which we sprayed fungicide, but the wheat crop failed to grow out of it and many of our farmer customers started to call asking what was happening with their wheat and what could be done. I asked a few trusted advisors and researchers what was happening, and uncertainty gave way to helplessness as we knew that we were in the infected area and came to understand that we could do little to salvage the situation.

What have to come to learn about bacterial leaf streak since then?

Bacterial leaf streak, or BLS, is present in growing areas around the world where moisture and warm growing conditions are plentiful, often under irrigation. It’s not something that western Canadian varieties are screened for during development as we can often be arid or definitely drier and cool enough for it not to be a problem. It can cause damage at various stages of development as it’s polycyclic, which means that infection can occur throughout the growing season starting from overwintering on host plants, infected seed/soil, wind-borne infection, which all combined under the right conditions can lead to rapid development. There are no completely effective treatments out there. Some seed treatments have shown some effectiveness through time, but nothing is better than genetic resistance.

How do you advise growers to manage it?

The best way to manage the disease is to source clean seed from unaffected areas and grow varieties that have expressed resistance in trials. With no official ratings given to Canadian varieties upon registration, that latter part is difficult. Knowing this, the picture becomes clearer as to why bacterial leaf streak impacted so many acres of a popular variety, which made up to 30 per cent of our sales over the past few years. We had a very dry fall and winter moisture levels were quite low. Hopefully the disease cycle will be broken in 2021, or else significantly reduced. 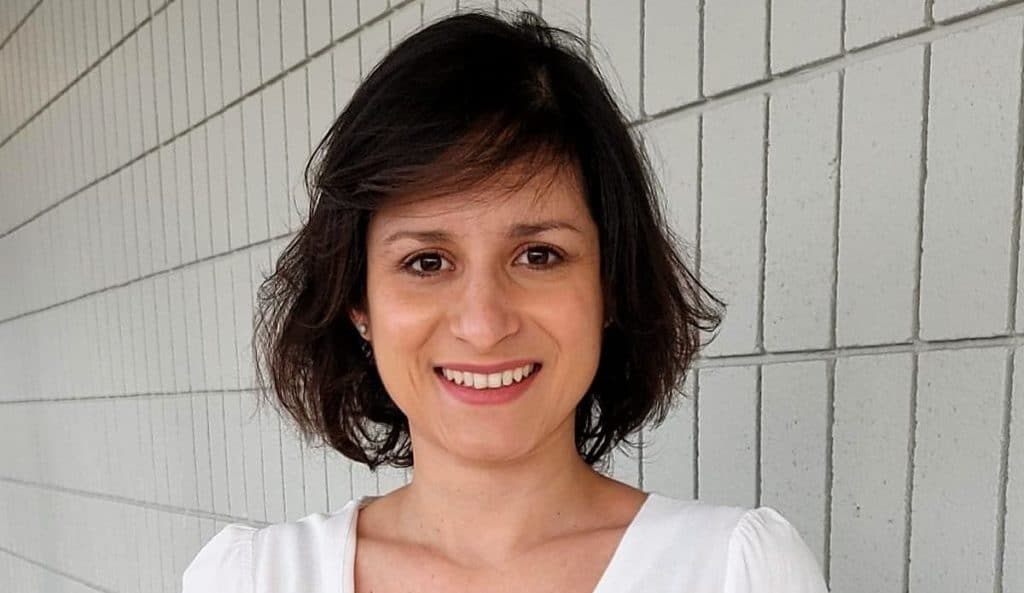 Maria is an agriculture engineer who graduated from the National University of La Plata, Buenos Aires, Argentina, where she also completed her PhD studies focusing on the tolerance to foliar diseases of wheat.

On the leaves, the typical initial symptoms appear as small, water-soaked, linear lesions running parallel to the leaf veins. If humidity is really high, you might be able to see the bacterial ooze on the lesions, which appears as little yellow milky droplets visible to the naked eye.

It’s often easy to misdiagnose the problem because it usually doesn’t occur in isolation. It usually occurs with other pathogens, like tan spot. However, something particular about this disease are the dark fruiting bodies that the septoria complex pathogens form on the tan-brown dead tissue giving lesions a speckled/dotted appearance.

So, what do we know about the pathogen that causes BLS?

Xanthomonas translucens affects mostly small grain cereals like wheat, barley, rye and triticale, but also might be present in native grasses or forage grasses. Any grassy cultivated or wild species of grass can be infected with the bacterium. Wheat is probably the most susceptible of our cultivated cereals, but it depends on the pathovar of the bacterium that is present. It likes areas with abundant moisture. This is because bacteria do not do well in dry conditions. Warm days and cool nights lead to dew formation playing a significant role in the infection because it helps the bacterium penetrate through stomata or hydathodes which are natural openings present in the leaf (not visible to the naked eye). Severe weather events that include heavy rain, strong winds and hail can also create wounds that facilitate BLS infection of the cereal plant. The bacteria can spread short distances through rain splash or wind-driven rain, but can travel long distances via infected seed, although short distance dispersal primarily to adjacent fields may occur via major thunderstorm systems. Here strong winds may pick up and spread infected crop debris. Rain splashing of the bacterial ooze on infected leaves may disperse the bacteria in water droplets that strong winds carry to adjacent fields.

How does the BLS pathogen’s life cycle work?

The organism either overwinters in crop debris, perennial weeds, or native grasses. Research suggests that the pathogen does not appear to survive in the soil itself for long periods of time. The pathogen can also survive in the seed. Seed is the most important source of primary inoculum and is how the organism is introduced in new areas. When the pathogen is there, and the weather is warm and moist, the bacterium is going to multiply, it will be released and splashed around and that is how it gets onto host plants that are growing in the spring. The organism penetrates the plant through natural openings or wounds that can be created by hail, wind, or mechanical damage caused by insects, for example. Once the pathogen infects, it will start to form on the leaves making the typical water-soaked lesions that run parallel to the veins. If the weather is right, the bacteria will keep multiplying (they can do it at remarkable speed) and then, they will splash around and infect more leaves. 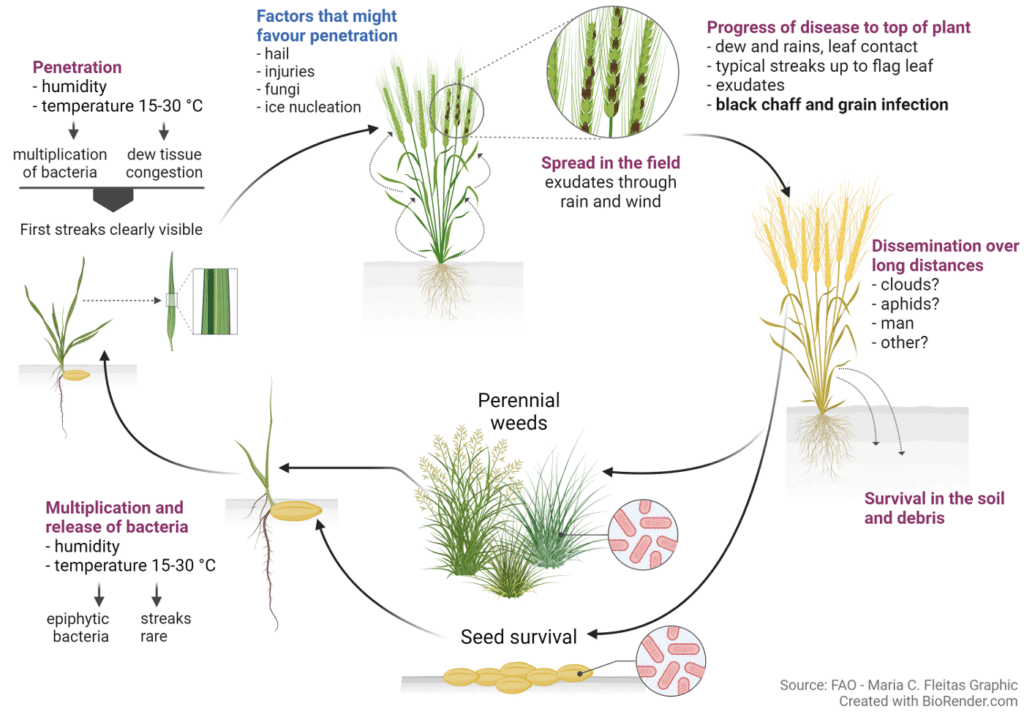 How can it best be managed?

Right now, there are only a few things that can be done about it. Watch and scout for BLS, learn how to recognize the disease (this is a new one for most people). Learn where you can get diagnostic support if you’re suspicious that you have an issue and start as clean as you can. One additional characteristic to look for is a lack of control of plant symptoms with fungicides.  One may feel they have a fungal leaf spot (e.g. tan spot and/or the septoria complex) problem and spray a fungicide. If fungicide performance is non-existent then you may be dealing with BLS, but a laboratory test of plant tissues will be needed to confirm the causal agent as the BLS pathogen. If you have confirmed symptoms in a field, producers may want to avoid using grain harvested from the affected field for seed in subsequent years.

Is a test available?

A test for BLS is on its way. One objective is to develop a seed testing protocol for barley seeds. This technology will have immediate application and will reduce production risks for farmers. If we get the funding, we are also planning to extend this study for bread and durum wheat.

Kelly is currently involved with research on the use of plant resistance for disease control in cereals, studying the impact of cropping systems on disease development, fine-tuning the use of fungicide application for disease management, plant disease surveillance and risk assessment, and the development of practical integrated solutions for crop health and disease management.

What does the BLS situation look like on the Prairies?

If you look at its development in the northern Great Plains, it was really in the mid to late 2000s that North Dakota, South Dakota, and Minnesota started noticing issues with BLS. If we look at the Prairie region, and we’ll turn our attention to Manitoba first, the information is primarily from 2020. There was one confirmed case, based on lab testing from last summer, and there were other anecdotal reports. Some of the symptoms were misdiagnosed earlier on, and likely were confused with leaf spot complex (tan spot and septoria).

One cereal variety that BLS was primarily reported on was AAC Viewfield, but certainly other cultivars are susceptible, based on some preliminary testing that Mike Harding with AAFC Brooks did in 2020. If you look at the rainfall data in 2020 for May, June and July, there were areas that had some pretty significant rain events. Severe weather events are likely a risk factor, which help to create wounds on the wheat or barley plant, which the bacterium can access in order to infect the plant.

If we look at Saskatchewan, there may have been some misdiagnosis in the field. There was one confirmed report of the issue as well as other anecdotal reports affecting a number of different varieties.

Turning our attention to Alberta, in 2012 there was a report of fungicide non-performance in the southern part of the province. We tested leaf samples and identified bacteria as the likely culprit based on bacterial streaming from infected leaf tissue. Mike Harding and colleagues noted that in 2013 BLS was reported in southern Alberta. Fast-forward to 2018, where moderate bacterial symptoms were noted in barley yield trial plots in the Castor area of central Alberta. It is likely the observed disease levels would have had an impact on yield. In 2019-20 Mike Harding and colleagues confirmed eight fields and dozens of anecdotal reports, especially in southern Alberta. Looking at the nature of development within and across fields, there was some evidence of seed transmission, while outbreaks appeared to be associated with severe weather events including thunderstorms.

Overall, if we go back to the mid 1990s, we have observed bacterial issues in a range of cereals, whether it’s wheat, barley or oat, but these are usually isolated. In our barley leaf disease screening nurseries, we might have breeding lines we’re looking at for scald resistance in barley, and we might find one or two of the hill plots out of several thousand with symptoms. At that point it was really more of a curiosity that we would see bacterial issues in some yield trials and occasionally in some commercial fields. It’s an issue that is certainly appearing to become more of a concern. It certainly started off as more of a research curiosity and something that wasn’t really very common. That’s obviously changed over the last five to 10 years and as such it warrants a closer look in terms of the nature and prevalence of the issue and development of management strategies.

How much is known about what varieties are susceptible?

We have a lot of questions regarding variation in Canadian varietal reaction. Mike Harding, plant pathology research scientist with Alberta Agriculture and Food, looked into this and focused mainly on wheat varieties as well as a single barley variety, and his research indicated all the varieties were more or less susceptible, unfortunately.

Bring me your Problems! I’ll Help Solve Them