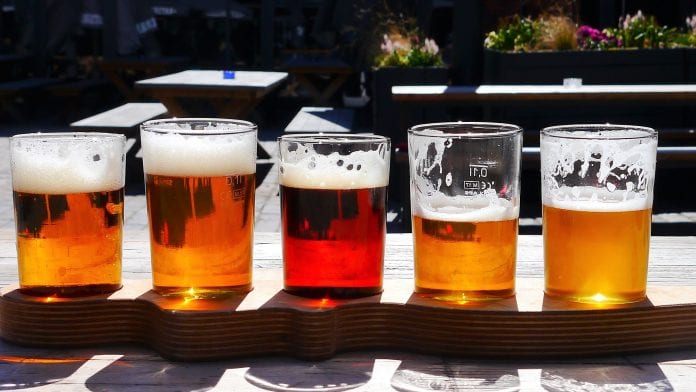 Craft distillers and brewers are looking for color and taste — different grain varieties provide that.

More than 100 years ago during the U.S. Prohibition era, most locals knew where to get the best illicit homebrewed spirits (aka moonshine, white lightning or hooch). No longer a clandestine, back-woods, “by the light of the moon” operation, today’s brewmasters blend and finesse their mash recipe as carefully as a French winemaker does to obtain a precise color and flavor for their products.

Fifteen years ago, there was limited diversity in American craft whiskey and beer. That has all changed so that even a casual, uninitiated consumer can identify a range of whiskey and beer flavors. Craft distillers carefully blend different grain mixtures to bring new, exciting flavors to their products.

“We bring a French philosophy of winemaking to distilling whiskey,” says Ironroot Republic Head Distiller, Jonathan Likarish. “It is a collaboration between French techniques and a local focus. In Texas, craft whiskey is mostly distilled from yellow dent corn and hard red winter wheat. We began by producing a North Texas flavor and then went out and found some ‘salt and pepper’ flavoring.”

By law, the mash used to distill bourbon must contain at least 51% corn. In rye bourbon, rye Is the flavoring grain. Wheat is often used for flavor. Malted barley is another common flavoring grain.

“For our products, we wondered, what if we were to use corn as a flavoring grain? Traditionally, corn is used more to fuel alcohol content. The rye and wheat were supposed to provide flavor. We know the French use different grapes to make vastly different wines and brandy, which led us to believe that different types of corn would give different types of whiskey. As we started doing our research, the first grain we found beyond yellow dent was Bloody Butcher corn,” Likarish recalls.

Seed savers in Appalachia claim that the origin of Bloody Butcher, an open-pollinated heirloom variety, goes back to when white settlers mixed their white corn with red corn, likely in Virginia in the early 1800s.

“Moonshiners in the Appalachian Mountains have been using Bloody Butcher corn to make whiskey for a very long time. They use it specifically for its flavor. We ordered some to make whiskey,” says Likarish. “For our first batch, we had to order seed that my parents then grew on their farm in Illinois. They harvested it and hand shelled about 50 pounds that we used to make our first test batch. We fell in love with the flavors it produced. That was the first corn we used for its flavor components.”

Magic Mana is the next variety Jonathan and his brother Robert Likarish, Ironroot Republic’s General Gladhander, tried. They say it tastes like sugar cookies coming off the still. Floriana flint corn from Italy is a variety with a cayenne kick that the Likarish brothers use in their mash which makes a considerable difference in how the whiskey tastes.

“The consensus in the whiskey community has been that corn does not have much effect on flavor. It is no surprise to us that every time we let people sample a mash that we have swapped out one corn varietal for another, they are amazed that they can definitely taste a difference.”

Corn hybrids that have been bred to yield a lot of carbohydrates, for ethanol fuel production, for example, usually do not have a complex flavor. GM corn could make spirit alcohol, but it usually has a flat, one-note flavor, says Jonathan. The yellow dent corn used to fuel Ironroot Republic’s whiskey alcohol content is a non-GM grain selected explicitly because it does have flavor.

Another big topic in the whiskey industry lately is the concept of terroir, the French notion of possessing the flavor and aroma of the land. This idea is commonly discussed on the wine and brandy side where distillers say that the grapes from each region have a different taste, a unique terroir. Traditionally, whiskey was not thought to have terroir, which may have been true because yellow corn is a bland, homogenous blend of corn from many sources that it all comes out tasting the same.

“We are looking for new corn varieties all the time,” Jonathan says. “We have tried Glass Gem flint corn, a different blue variety, a black Aztec variety and a green Oaxacan variety which has an entirely different flavor. We have even tried a purple barley variety from Montana and a soft wheat variety, which I really like. It may show up next season in a wheated bourbon.”

One of the primary things differentiating beer making from distilling spirits is the intermediate grain malting. This is the grain steeping, germination and drying process, whether it be barley, rye or wheat, that determines beer’s flavor and color.

“It is in the malting process where we develop the vast majority of a beer’s color and flavor that come through to the consumer,” says Bells Brewery Master Brewer, John Mallett. “As a brewer, when I am thinking about what grains I want to use to make a beer, I need the right malt. I need to have the right attributes in the grain to successfully craft my beer. My ideas for my beer have to line up with the barley attributes. Those attributes will then line up with the plant’s genetics and the growing conditions. How we look at grains as brewers is different than what is most important to distillers.”

That being said, to set up malting, the grains must contain the right features. Total protein is one analytic that is important to brewers. The variety of grain is also important because it sets the analytics for that grain during malting to determine how much the proteins are broken down into amino acids.

Malt is what drives beer. Bells uses a lot of different types of malt to pull that beer together. The spectrum of malts used – chocolate malts, dark malts, black malts, caramel malts –  come together in this beautiful harmony. It is a continuous spectrum of flavor that develops within that beer.

“A beer enthusiast will focus on the hops,” says Mallett. “The hops are a much lower percentage of what goes into beer in terms of weight. Malt brings an incredible array of things to beer. All the sources of the alcohol, all the sources of color, body and a significant percentage the aromatics all come from barley. Hops, besides adding flavor, don’t bring much. They don’t contribute to alcohol, body or many of these things. Body is one of the key attributes that malt brings to our product.”

The best source for malting barley depends on the kind of beer being made. Mallett says there are some very good traditional barleys grown in the British Isles which make nice British-style beers. Those varieties evolved with the beer requirement for that region. In the United States, the Intermountain West, including Idaho and Wyoming, are great places for barley production.

In terms of beautiful, bright malt barley for beer, Mallett says a brewer will have a hard time doing better than using the barley that comes out of Idaho.

“The goal of a brewer is best expressed when they get out of the way and let the flavors derived from nature’s bounty shine forth. In some ways, I look at the beer lover with a glass of beer and if they have the sense of being able to reach back through time and space to the land from where those high-quality ingredients are derived, I will have done my job well,” Mallett says. “Many years ago, a very wise brewer said that a method for making good quality beer from low-quality malt has not yet been discovered. I truly believe that is still true today. You need good quality ingredients going in to get good quality beer coming out.”

Today, Canada's federal government held a live webcast to commemorate the 75th Anniversary of the founding of the Food and Agriculture Organization of the United...
Read more
Science & Technology

Everyone’s frantically looking for a COVID-19 vaccine, but could genetically engineered plants be the solution? Vaccination is one of the most effective public health interventions...
Read more
Plant Breeding

Experts chat about the history and breeding of our favorite movie food: popcorn. Popcorn is a unitasker. It doesn’t have a long list of functions...
Read more
Food

While wheat is considered a more challenging crop, breeders around the world are working to improve wheat’s genetic potential. Globally, wheat is a gold-medal crop....
Read more
Tweets by GerminationMag