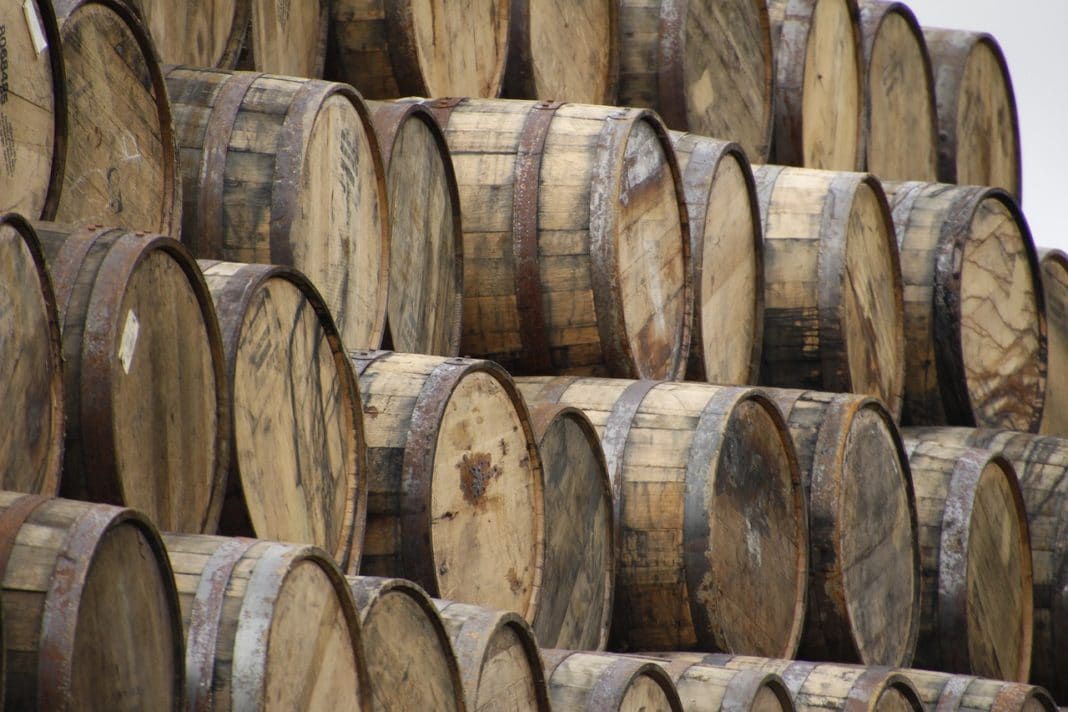 An exciting look back and forward at beer, vodka, gin, whisky and more being made from wheat.

When we think of beer and spirits, wheat isn’t likely the first crop that springs to mind. But, just like every other grain crop that humans have ever cultivated, it’s been used to make spirits and beers both plain and more inventive.

Nowadays, with the craft brewery and distillery trend going strong, there are some new wheat genetics developments – and no shortages of new wheat-based alcoholic drinks to try.

The Gin is In

According to a website called “The Gin is In,” among the eight crops that gin is mostly produced from, wheat only became a more-common base for gin in the 20th century. Because wheat was (and still is) “such a useful grain for baking, there was often very little good-quality grain on the market for distillers.” However, “advances in crop technology and modern agriculture have reduced wheat scarcity and now distillers can choose a wheat base if their heart-so-desires.”

One of these is Chuckanut Bay Distillery in downtown Bellingham, Wash., which uses local white winter wheat in its gin.

Chuckanut Brand Ambassador Reggie Gallo says using local grains in their products is a priority, “and luckily we found a farmer in Whatcom County where we’re located who could provide us with corn, rye and wheat. We use white winter wheat mostly because it’s what we could find.”

When asked why they chose wheat for their gin, Gallo explains that wheat lends the spirit a softness “that you don’t get from say, corn or rye.”

“So, with that, our gin is very gentle and approachable,” he says. “We let the vanilla sweetness of the wheat spirit work in conjunction with our botanicals to bring out the best in each. Some people may say that the base spirit for gin doesn’t really matter that much because you just ‘cover it up’ with botanicals, but we don’t think that’s true. The wheat spirit we produce is one we’re very proud of and we would say it’s a very important part of our gin.”

Wheat whisky in the U.S. (according to Stephanie Moreno, blogger for the ‘Distiller’ website) must be aged in new, charred oak containers and can be sourced from 51% to 100% wheat. “As for flavor profiles, think of ‘Wheat Thins’ or wheat bread,” she writes. “[Wheat whiskies] are flavorful, yet have a lightness and gentle sweetness to them. Depending on the amount of secondary grains, the spice factor is generally relatively low.”

One of the makers of whisky with a lower amount of wheat is major distillery Brown-Forman. Its first wheat whisky, launched in spring 2018, contains 52% wheat, 8% rye and 20% each malted barley and corn in the mash. In Australia, Starward makes a 60-40 wheat-to-malted barley blend whisky, distilled and matured separately in red wine barrels.

Last Mountain Distillery in Saskatchewan is another that makes whisky from wheat, and in the case of their “Canadian Whisky”, wheat and rye. Their 100% wheat whiskies include a “Single Cask” and a “Red Wine Barrel Aged.”

Last Mountain Head Distiller and General Manager of Operations Braeden Raiwet explains that when the owners Colin and Meredith Schmidt started the distillery, they did some experimenting with different grains to see what flavor profile they liked best – and wheat won the day.

“The wheat gives the whisky a sweeter and smoother taste than something like a rye grain,” he says. “Having easy access to wheat right in our backyard – our wheat comes from a farmer about 40 km down the road – is an added bonus.”

He notes that wheat mash doesn’t become overly thick like rye mash, which “makes it bit more forgiving” and “easier to work with.”

Raiwet adds that “for an unmalted grain, it actually ferments quite well, and we get fairly decent conversion out of it. The wheat is also a bit softer than something like an unmalted rye, which helps to speed up the grinding process.”

Getting Creative with Vodka

Still in Saskatchewan, there are at least two other wheat vodka-makers, both with unusual products. Lucky Bastard Distillers makes a Rhubarb Vodka and Stumbletown Distilling has created the first spirit in the world made from 100% locally-grown “Saskatchewan Purple Wheat.” Its Purple Wheat Vodka won the Platinum Award at SIP Awards 2019.

Stumbletown owner Craig Holland notes that a lot of vodkas are made of wheat, but any grain can be used. Stumbletown had never made vodka but decided to go for it after hearing about SK Purple.

“We’re all about trying new things, and this wheat seemed to be a good opportunity,” Holland says. “It’s hard to be creative about vodka. It’s supposed to be an odourless and tasteless spirit, but each grain does provide a little flavor, and we do have a lot of flavor in this one. It’s got a really smooth mouthfeel and can be enjoyed on ice. We’ve also done an oaked version limited edition, and it’s just about gone.”

The release of Stumbletown’s Purple Wheat Vodka has resulted in a lot of media attention. Holland says they’ve gotten requests for shipping it all over the world.

“We may ship it in future, but right now it’s only available within the province,” he says. “We may do a purple wheat whisky at some point in the future.”

A Beer of Many Names

No matter what it’s called — witbier, weissbier – wheat beer is a very old beverage, as old as 2,000 years. Wheat beer is generally bubbly with a unique tangy flavor and pale color. German versions tend to have banana and clove flavors, while Belgian wheat beers are flavored with coriander and orange.

The website, Craft Beer, is dedicated to showcasing the differences among beers, describes American wheat beers as among “the most approachable beers in the craft beer world” because without access to the specialty Bavarian weizen yeast, American brewers of wheat beer “were forced to use clean-fermenting American ale and lager yeast. The American wheat’s composition gives it a particularly inviting style, accepting of additional ingredients, particularly raspberries, watermelon and even chilis.”

Bell’s Brewery in Michigan makes a wheat ale called Oberon, and Anchor Brewing Company in San Francisco, America’s oldest craft brewery, makes several. Anchor was the place where the first wheat beer in America since Prohibition was made, in 1984, called Anchor Summer Beer. The brewery also offers Anchor Mango Wheat and most recently launched Anchor Winter Wheat, a blend of malted barley and four varieties of wheat from Belgium, Germany and the Midwest, plus a locally-grown soft red winter wheat.

Michael Cooper, executive director and CEO of the premium malting company Independent Barley & Malt (IB&M), notes that aside from some craft breweries that seek out specific varieties, most wheat malt, roasted wheat, wheat flakes in the U.S. are not marketed as varietal-specific. Indeed, most of the wheat used for malting in the United States is Canadian hard red spring wheat, but the trouble is that type of wheat is primarily used for baking or milling and not malting. Among other qualities, wheat for baking purposes has higher levels of protein, and that’s not desirable for malting. This situation is the reason Vince Coonce, IB&M’s director of malting, is working with scientists at Michigan State University and the Michigan Craft Beverage Council to select a soft winter wheat that is better for malting.

The study, now in its second year, involves the measurement of traits of four Michigan wheat varieties grown under different fertilizer treatments – agronomic traits as well as traits that lend themselves to high-quality malt production such as grain plumpness, friability and extract.

In terms of breeding wheat specifically for distillation, some years ago the GreenGrains Project was initiated at the James Hutton Institute in Scotland. The project breeders aimed to identify traits that contribute to high alcohol yield and also locate the genetic and environmental factors controlling these traits. High alcohol yield (related to amount of nitrogen in the grain) had already be shown to be influenced by environmental factors.

“Since GreenGrains finished, we have focussed on barley and projects that have both a wheat and barley component,” she explains. “Such as a recently-funded European Union project developing genomics tools for legacy collections of both crops.”

Wheat has certainly earned itself a permanent place in the making of the many spirits and beers we enjoy. Both large firms and small craft distilleries and breweries are still experimenting with wheat in their products, and its future seems bright.

However, a perennial grain cousin of annual wheat called “Kernza,” developed by the Land Institute in Kansas may have an even brighter future. It’s so far being used in a beer offered by Patagonia of Portland, Ore., and who knows what other beverages will follow.