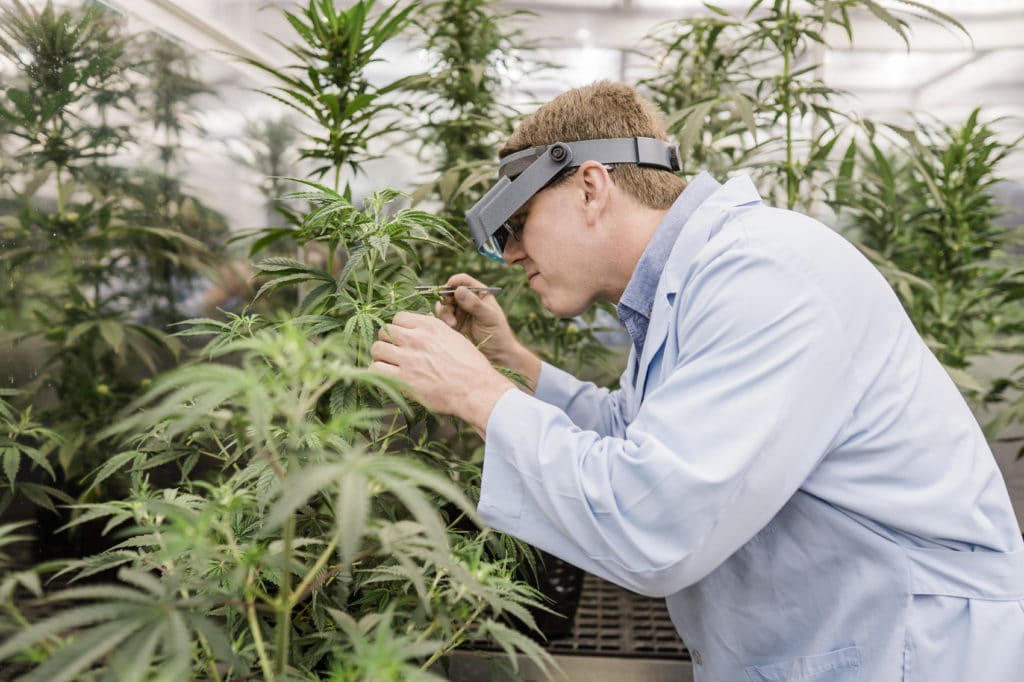 Health Canada and the seed industry have opened the door to a new era.

For Jan Slaski, April 19, 2021, will forever be the day that changed the hemp industry in Canada for the better.

It was that day Health Canada released its updated list of approved hemp cultivars, and the new additions are significant.

“It’s a game changer. For years farmers have been able to grow hemp for food and cosmetics and fibre, but these other opportunities have been missing. It’s really the dawn of a new era for us,” says Slaski, principal researcher at InnoTech Alberta.

That other opportunity, of course, is cannabidiol (CBD) production.

For nearly 20 years, Slaski has been leading research aimed at introduction and breeding of hemp varieties that suit the needs of the fibre and food industries on the Prairies. Now, his breeding program is able to work in a space that holds much promise for breeders, growers, seed companies, patients, recreational cannabis users and more.

The CBD market is exploding in Canada. A 2020 report conducted by the Institute of Fiscal Studies and Democracy at the University of Ottawa estimated the CBD market in Canada at $1.9 billion.

Hemp plants, which are a different strain of cannabis, can produce CBD without a high THC content. Cannabis containing 0.3 per cent or less of THC is considered hemp in Canada.

Now, the Canadian hemp industry has access to varieties that produce as much as 14% CBD, many times higher than the varieties they previously had to work with, which were in the 2% range.

“This is extremely important because now, finally, we can fully take advantage of what is a multipurpose crop,” Slaski says.

Since the new Health Canada list was issued on April 19, Alberta-based Tritium 3H announced two major deals that will allow them to bring significant new CBD genetics to the Canadian market.

Specializing in hemp variety testing and commercialization of industrial hemp varieties, Tritium 3H announced an exclusive three-year license agreement with Colorado-based CW Hemp Supply Co., a division of American CBD product brand Charlotte’s Web. The brand made headlines in 2013 when news network CNN profiled Charlotte Figi, who in 2006 was only months old when she was diagnosed with Dravet Syndrome, a rare form of epilepsy that starts in infancy.

By the time she was five, she was having 300 seizures a day. Her parents tried a CBD product manufactured by Colorado hemp growers the Stanley brothers — who would go on to found Charlotte’s Web — and her seizures all but stopped. Charlotte became one of the faces of the CBD movement and a testament to the potential benefits of the cannabinoid.

Sadly, Charlotte passed away in April of 2020 at the age of 13, but her legacy lives on. Colorado has officially named April 7 as Charlotte Figi Day in the state.

Now, two Charlotte’s Web varieties — CW Ambassador and CW Duchess — are approved for production in Canada. They are among the first hemp CBD cultivars on the Health Canada list that are early flowering and early maturing for outdoor cultivation and harvesting within the shorter Canadian growing season. The hemp seeds will be produced and sold under the CW Hemp Supply Co. brand.

Of course, innovation can’t happen without a degree of consumer confidence. Bear Reel, vice president of cultivation and R&D at Charlotte’s Web, was the lead developer of the two new cultivars approved by Health Canada. She says consumer confidence in hemp extract products relies first and foremost on good hemp genetics. Identifying those genetics isn’t easy, however.

Like many crops in Canada, hemp varieties that grow well here need to be early flowering. Identifying those varieties means a need for regional trials, something that prior to now has been difficult, according to Randy Shultz, chief technology officer for the California-based Arcadia Biosciences. Arcadia also has struck a deal with Tritium 3H to distribute three of its GoodHemp varieties in Canada.

“These varieties are true hybrids. The team went to great lengths to stabilize the genetics on the parental sides and the inbreds to get the uniformity and performance that’s needed and to finish really early,” Shultz adds.

“The time from flowering to harvest is shorter than many other varieties out there, which in Canada is a huge benefit. But the amount of research needed to get there is significant, so to open up the space like this and allow these CBD varieties to be grown in Canada is a leap forward.”

It’s not just CBD that the cannabis industry in Canada is looking to bring to market. Other so-called minor cannabinoids, including cannabigerol (CBG), are in demand as well. Panakeia, a THC-free and high-CBG hemp variety from Ottawa biotech company Cannabis Orchards, was also added to the approved cultivar list.

The variety, technical name HURV19PAN, is the first THC-free, high-CBG variety approved by Health Canada, as well as the only CBG variety currently available in the country.

The variety, expected to contain 14% CBG in the field, was developed with partner Hemp Trading S.L.U. and the Polytechnic University of Valencia in Spain. The development of Panakeia was made possible through cross and selective breeding by inhibiting specific pathways of the biosynthetic route of cannabinoids, thus preventing the formation of THC, the psychoactive component of the plant, and increasing the accumulation of CBG, a cannabinoid that until now was only found in tiny amounts in the plant.

That means a double achievement: not only has THC been totally eliminated, but the concentration of CBG has been boosted. The result is a strain specially developed for medicinal cannabis patients for its therapeutic properties as well as for researchers and pharmaceutical companies interested in exploiting the medicinal properties of cannabis.​

Jamie Ghossein is chief executive officer of Cannabis Orchards, based in Ottawa, Ont. He’s also a full-time physician at Ottawa Hospital. The potential held in cannabinoids like CBG is what inspired him to get into the cannabis industry.

“I call this new wave of minor cannabinoids Cannabis 3.0. The cannabis space really is being revolutionized and giving people a host of new therapeutic options,” Ghossein says. “I get so many emails from people excited to have a new option in CBG, and that excites our whole team.”

Cannabis Orchards has held a Health Canada plant breeding industrial hemp license since 2018. The license includes the cultivation, import, export, sale and production of hemp seed and flower, as well as the cultivation of unapproved cultivars for the purposes of registration, research and field testing.

The company, which specializes in indoor feminized seed production, holds the exclusive rights to Panakeia for production and sale of seed, clone and plant matter in Canada.

Despite the excitement in the cannabis community surrounding minor cannabinoids like CBG, there are hurdles. The biggest one Cannabis Orchards faces at the moment, Ghossein says, is producing enough feminized seed, cultivating enough acreage and making it available to as many people that need it as possible.

The company just purchased some land and is planning on building a dedicated feminized hemp seed production facility, what Ghossein says will be the first of its kind.

“A big issue is preventing pollen contamination between varieties when you’re working with more than one. Right now, we’re only working with one variety, which makes it very simple. But we obviously want to increase the number of varieties that are available and the number of minor cannabinoids that we’re offering. Meeting quality standards when working with multiple varieties is the next bridge we have to cross.”

The more feminized seed the company can produce, the more acreage can be cultivated and the more CBG can be extracted for the market, he notes.

“A big goal for us is actually to produce as many seeds as possible and to get it to as many growers as possible,” he says. “But the main mission is really bringing CBG to the hands of researchers, clinicians and ultimately consumers who want access to it. It’s more of an accessibility problem we are trying to tackle,” he says.

He expects the first CBG products to hit the market by the end of 2021 or early in 2022 and expects another minor cannabinoid to start making waves next year as well. The company also has a number of in-house plant breeding projects for new variety development.

For Jan Slaski of InnoTech Alberta, the potential goes beyond just cannabinoid production, though. He hopes hemp grain will soon be utilized as livestock feed as well — which Health Canada currently does not permit — opening up a new market for the crop.

On behalf of the Canadian Hemp Trade Alliance (CHTA) Slaski coordinated generations of a robust set of analytical data showing that hemp grain and its fractions including screenings and hulls can be safely incorporated into livestock feed. Currently the application package is being submitted to the CFIA seeking registration of eight hemp grain-based products.

Slaski notes that when hemp grain is processed for human consumption, as much as 40% is discarded in the form of shells, which he says could have great value in the livestock space.

What are CBG and CBD?

Cannabigerol (CBG) is a non-psychoactive cannabinoid that could possibly have benefits in treating glaucoma, inflammatory bowel disease, and as an appetite stimulant.

Cannabidiol (CBD) is a non-narcotic and may hold promise in treating anxiety, insomnia and chronic pain.

—EDITOR’S NOTE: This is the first instalment of an ongoing series called Cannabis Chronicles that digs deep into issues that shape the cannabis industry in North America. Got a story idea? Email [email protected]!

How to Navigate a Return to the Office

Bring me your Problems! I’ll Help Solve Them